Municipal tax dollars pay for a wide variety of projects and services including public safety (police, fire & EMS), parks and recreation, infrastructure (roads and utilities), water, and sewer. Because the City is primarily a service organization, approximately 60% of the operating budget is spent on labor. Other significant spending includes $85.4 million in spending for capital projects, which is approximately 36% of the total budget.

The 2023 budget development process is underway and a recommended budget was presented by the City Manager to City Council in Workshops on Oct. 3, 17 and 31. The first public hearing was November of 2022 with the second public hearing planned for December 7, 2022, followed by City Council’s adoption of the City’s budget.

Every year City Council, the City Manager , and City staff work together to develop an annual budget.  The annual budget for the City is the highest expression of the City Council’s policies and decision-making; it expresses the initiatives, investments, and services provided by and through elected officials and staff.

The budget serves as a guiding document for how money that comes into the City should be spent to provide and improve services within the City while aligning with the City Council’s strategic priorities. The annual budget helps determine which objectives have the highest priority and will produce the greatest positive impact in the community.

The budget process is an 8-month process that begins in May of each year. 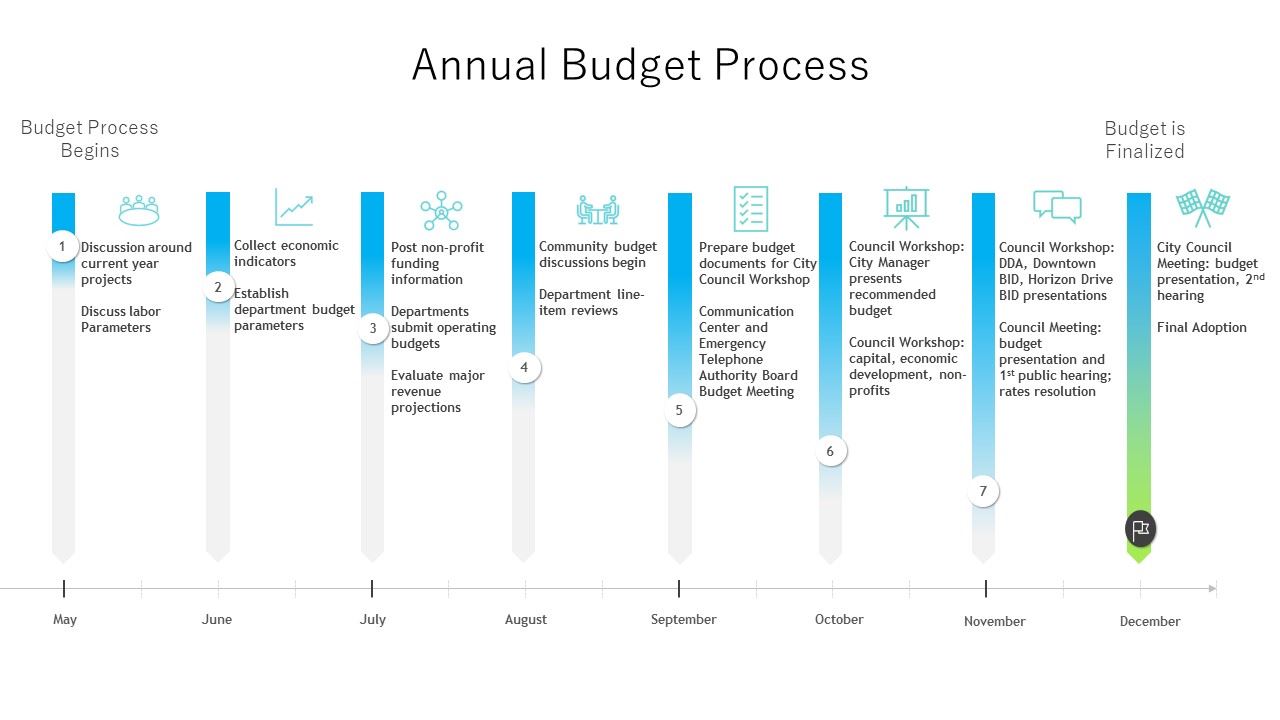 The City’s annual budget is adopted by City Council for a one-year period beginning January 1 through December 31 of each year. The budget is developed by staff based on the City Council’s and Community’s strategic initiatives as established by the City Council Strategic Plan as well as the One Grand Junction Comprehensive Plan. The Strategic Plan is updated and re-adopted every two years and the Comprehensive Plan is a culmination of a multiple-year process engaging the community in cooperatively producing a “blueprint" for the City.  The foundation of the Comprehensive Plan is the community’s vision for its future.

The City’s budget is a plan how of how to deliver services, programs, and projects to the community in the upcoming year.  It is a policy document, an operational guide, and a communication tool.

After several public workshop sessions where the City Council reviews and discusses the details of the budget and two public presentations and hearings at City Council meetings, the Council formally adopts the budget and authorizes spending through the adoption of an appropriation ordinance.

The City hosted two Community Budget Discussions on August 10 and 11. Community members are encouraged to learn more about the City's budget and budget process and participate online at www.GJSpeaks.org.

Where the Money Comes From

The City receives revenue from a variety of sources. The majority of revenue comes from sales and use taxes. The remaining revenues come from property taxes, fees, grants, dedicated resources, and other revenue sources.

The City budgets and accounts for its activities in separate funds. This emphasis on fund accounting for governments is to ensure that the resources are used for what they are specifically intended for or legally restricted to. The largest operating fund of the City is the General Fund and supports all the general government operations such as public safety, public works, parks, recreation, planning, and administrative functions. Another major fund type for the City is Enterprise Funds which basically run like a business. All revenues from fees and service charges are used only for the support of that business.  A good example of an Enterprise Fund is the City’s Water Fund. City Council formally authorizes spending at a fund level, however, the budget is organized and presented by City Departments and types of spending (e.g. labor, operating, capital, debt service).

Plans that Influence the Budget

The budget process, and the decisions that must be made on how to best lead the development of a safe, vibrant and sustainable city, are supported by the following plans:

The City has been awarded the Government Finance Officers Association (GFOA) Distinguished Budget Presentation Award for the annual budgets. The award program was established to encourage and assist local governments to prepare budget documents of the very highest quality.